I'm really going to miss LJ. To me, it's still the best of the social networking sites because people tended to take more time in making posts and would expand on things that were important to them instead of just writing a single sentence about what they're doing at that moment or listing up a band they liked. Twitter and Facebook, to me, actually seem to encourage keeping people at a distance, of not knowing or keeping in touch with them better as they give the illusion that a single sentence or short paragraph is all that that person is about. You take a single pill and the 'need' is addressed. You move on with your day.

I met quite a few people through LJ, almost all of whom have moved onto other sites or perhaps no sites at all. Of the list of people I follow, only two post regularly. There is still apparently a few people who follow me, but I never hear from 99% of them. It's been a month and a half since I posted here and of my last three posts, none received any comments. I miss the days when there would be dialogue and discussion between people here. I know that others have had more luck here. I also know that posting loud, startling statements (something I don't like to do) garners a lot more notice than simply posting work, theories in art and so forth. I guess that because there was more dialogue in the past and now there isn't I feel more let down with LJ than I do with the other sites.

While I'm going to continue to check in here, for the two folks who still post and the possibility that others might every few months, I'm not going to update anything here. If anyone really wants to see the art, it's available on my blog, my tumblr, or my flickr.

I'll miss LJ. I really will. There were a lot of thoughtful moments had in both reading and writing things here. Technology seems to have passed it by. Which is a shame. Too many things seem to want to speed us up, have us consume more while receiving, perhaps even living less.

Here's the beginning of an image dump. The rest will be behind a cut.

One of two recent Fite redraws: 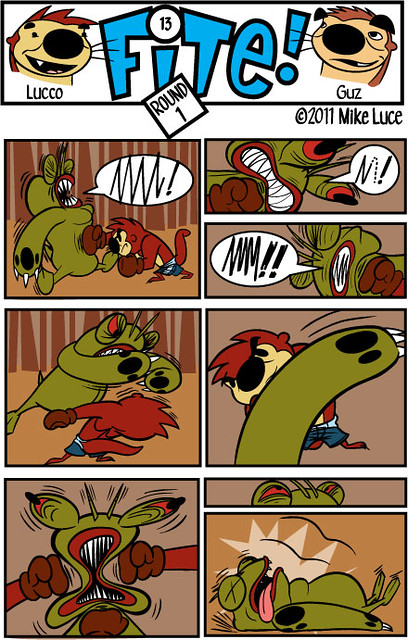 I've still been working on the Fite re-draws in the background. I've also had some decent crit here and there, the most recent of which was from an old co-worker who's now a pro working at Drawn + Quarterly. His suggestion was to dump the text in the logo in favor of letters that were hand drawn. To him, the font used stuck out like a sore thumb. I saw no reason not to give his suggestion a try and, since I still have a box of Speedball pen nibs, there was no reason not to whip together a new version. 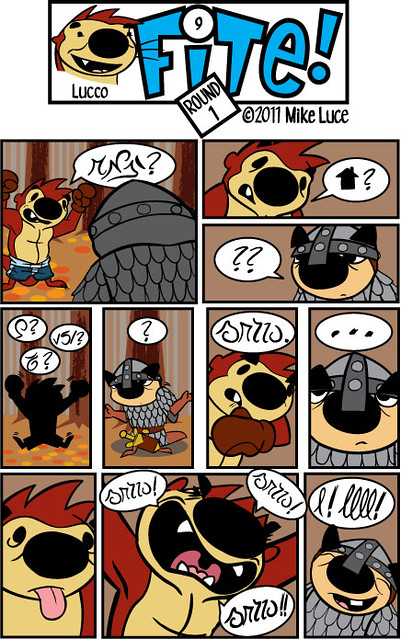 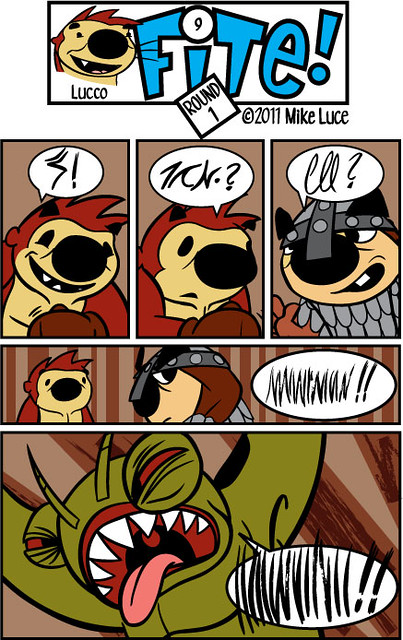 Inspiration can from from anywhere. I suspect it comes more from sources one isn't considering than one is at any given time. I watched a LOT of tv when I was younger. "The Mary Tyler Moore Show" was and is one of my favorites. Because of this, it's likely that when I needed a grumpy sidekick for Lucco, Ed Asner was somehow in my head. As for the body type, I don't know why Villechaize was in there but he must have been. Hadn't realized his part in this until I was re-watching "Man With the Golden Gun" the other day. So there you go. 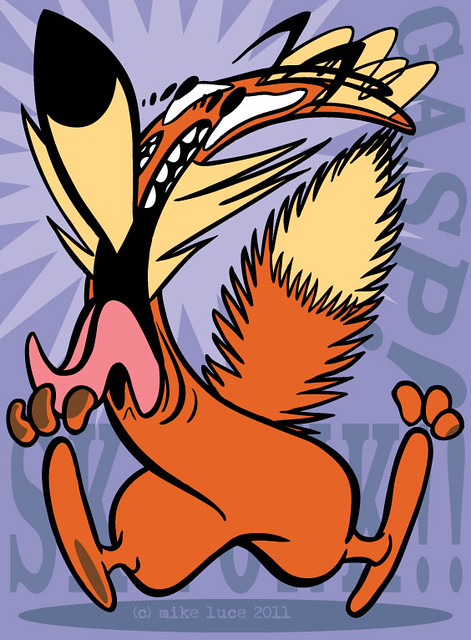 Just messing about with some more extreme poses.

A friend wanted me to design her a Facebook icon with her as one of my bunnies. So here it is and a rare one at that; a female character: 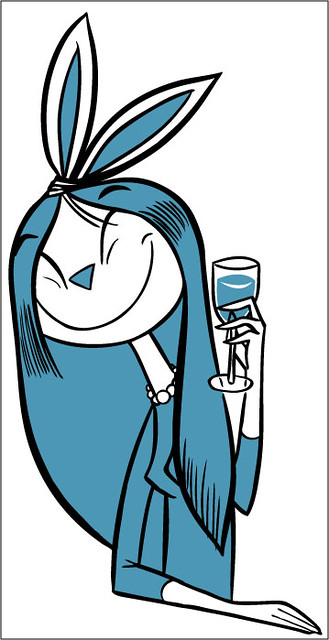 This isn't the only such moment nor the only friend, just the one I was thinking of today.

I've been redrawing the earliest Fite pages so that I can possibly use the comic as a portfolio piece. As it stands, the first few pages are just too rough in comparison to the rest. Wasn't going to post them but I had a request so I will. 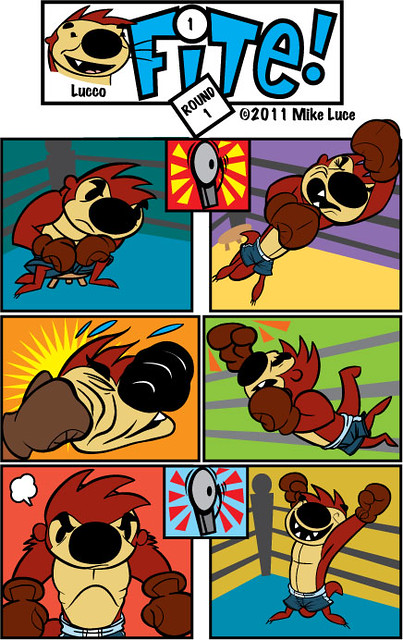 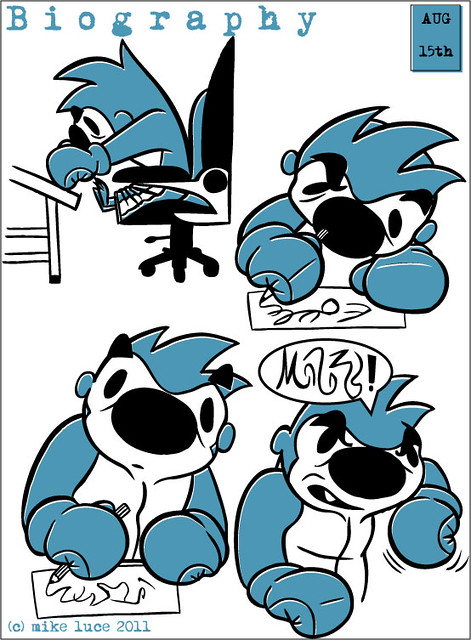 Been working with Lucco lately, redrawing the first 17 pages of Fite. I want to use it as a portfolio piece and the early drawings are just too crude for me to feel comfortable. I've got the first five done though I'm only redrawing the figures, not the backgrounds. There's still going to be a style shift in there but looking at the comic again, I'm happy enough with the way it looks to not mess with it. 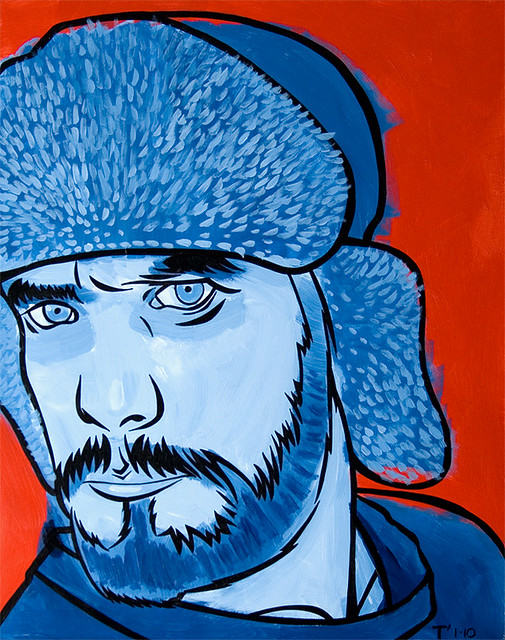 This painting (actually, its digital form) was the center of a discussion with someone who thought they were trying to do me some good. A hammer applied to something less than shatterproof perhaps. Ever since that time, and the eventual utterly un-understood falling out that came from it, the textual conversation has haunted me. Mostly, those things said, stay in the background and while I've had projects to finish, I've paid those words little heed. Now, in the downtime, they come back and I re-read things and go over things said on both sides. I am no closer to understanding what this person was trying to say now than I was then. Is this a lack of growth on my part or a lack of fluency on theirs?

This person said some very blunt things, things not meant to hurt but said in an attempt to open my eyes to a problem they did not believe I had even seen. Things were said such as this:

You can keep using your art to do what amounts to dioramas of your past, either in pure biography like Harlon or in heavy, unimaginative allegory pieces like Tamino, your weak work--stuff that feels cathartic, that makes others who lived your life arc go 'Hey I recognize that!' and thus get it; or you can do something much harder, less gratifying on the immediate level, but which I think is TREMENDOUSLY more exciting, and show in characters, figures and even in narrative how OTHERS, even yourself, struggle with the burden of seeing, such as the barely-contained rage in the Mutley(?) portrait and in the explosive action of Fite! and your best work.

And of course at this point, with Tamino finished and sitting at a publisher with me waiting for a yay or nay, with no project in sight and no particular direction, the words written that night come back like an irritated scar. I pick at them, wonder, worry, poke. "Fite!" is good work, "Tamino" is unimaginative? I might have thought the opposite, that "Fite!" was barely more than a saturday morning cartoon, certainly more marketable than "Tamino" ever would be.

My partner tells me to walk away, to pay no heed, that these words can only do me harm and no good. And he may be right. Like any failure, we all go over and over them, wondering which choice would have made a better outcome. Or was there a failure? Perhaps the failure is having given weight to these words at all, to having remembered them, to having them had any effect on my course.

I've been pretty lost lately as far as artwork goes. The split of "fine art" and cartooning doesn't seem to be working as I feel I'm not good enough to do the former and keep trying to convince myself that the latter is a worthwhile pursuit. It's possible that, because I -enjoy- making the comics, I feel guilty or feel that enjoyment of making them somehow means that they can't be serious 'art,' even if not of the -fine- kind.

So that's where I am. 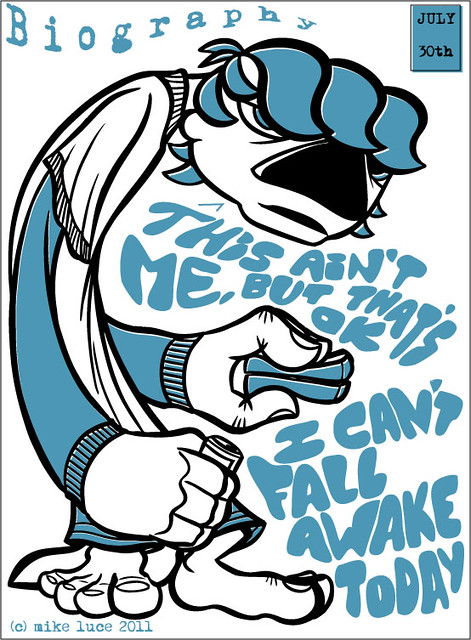 VERY sleepy this morning. Was looking through old stuff and found Joe Flash there, so dredged him up to take my place today. Besides, he's always sleepy.
Collapse